Profile of the Speaker:

Walid Iqbal, a member of Pakistan Senate, is one of Pakistan’s leading corporate lawyers, and has nearly two decades of teaching experience in the fields of Law and Economics. He entered legal practice in Pakistan in 1994, and became an Advocate of the High Courts of Pakistan in 1996. After earning his LL.M. from Harvard Law School (1996–97), he was admitted to practice in the State of New York in 1998 and to the Roll of Solicitors of England and Wales in 2004 (currently maintaining non-practicing status).

Between 1997 and 2004, Senator Walid Iqbal worked for two leading international law firms established in New York and London, and returned to Pakistan to re-start his practice here in January 2005. He is also a member of the Board of Governors of the Nazaria-i-Pakistan Trust, and a member of the Board of Trustees of the Pakistan Movement Workers’ Trust. Apart from Harvard Law School, Senator Walid Iqbal has also been educated at Aitchison College Lahore (O-Levels and A-Levels), the Wharton School of Business, University of Pennsylvania (B.S. Economics), Pembroke College, Cambridge (M. Phil. in International Relations), and the Punjab University (LL.B.) (Gold Medalist).

Senator Walid Iqbal has been serving as an Adjunct Professor of Business Law and Corporate Governance at the Suleman Dawood School of Business of the Lahore University of Management Sciences (LUMS) since 2006. Prior to that, he has taught Business Law at the MBA Program of Government College University, Lahore, in 2004 and 2005, has taught an undergraduate course in International Economics at Harvard University in 1997, and has served as a lecturer of Jurisprudence at the Punjab Law College, Lahore, from 1994 to 1996, as well as a lecturer of Business Law at the Punjab College of Business Administration, Lahore, in 1996. Senator Walid Iqbal belongs to a family of international renown in the fields of intellect, law, public welfare, judicial service, and social activism. He also regularly appears in international conferences, public talks, debates, and television talk shows.

He has several published papers to his credit on a variety of legal and non-legal topics, including Pakistan’s nuclear tests and the sanctions regime applicable thereto, Pakistan’s constitutional system, alternate dispute resolution, Islamic law and constitutional structure, Pakistan-Russia relations, and the life and teachings of Allama Muhammad Iqbal.

Abstract
Allama Muhammad Iqbal (1877–1938) is known across the globe as a poet, philosopher and thinker. He is also described as a great leader of the Muslims of the Sub-continent, an exponent of Pan-Islamism, and a national reformer. But not many are aware that Iqbal had keen eye for all the contemporary disciplines and had a deep understanding of the scientific developments and philosophical debates of the twentieth century. Even though he had never been admitted to a university to study science, Iqbal was well-versed with the science of anatomy as well as the latest inventions in the fields of engineering and technology. Research on Iqbal’s life shows that books on science and engineering authored by the some of the most prominent scholars of his time remained under his study. Iqbal’s poetry and philosophical thoughts are, thus, not only a combination of the impact of modern scientific developments, but also contain impressive predictions on the basis of his study of modern science. Accordingly, this webinar intends to explore this relatively lesser-known aspect of Iqbal’s personality, and to highlight that he was the only poet of Urdu and Persian languages possessed with sound knowledge of science and technology.

Target Audience
The webinar is open to students, researchers, young scientists, policy makers and academicians from the OIC member states and other countries.

Zoom link for participation will be shared with selected participants.

INTERNATIONAL SYMPOSIUM ON EXCELLENCE IN SCIENCE 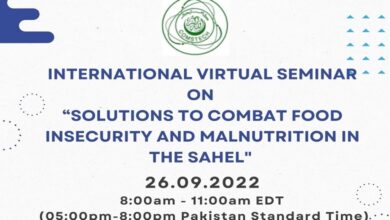