COMSTECH and ICYF announced the results of the 1st Essay Competition on Artificial Intelligence in an online ceremony with H.E. Ambassdor Askar Massinov, the Assistant Secretary General (S&T) of the OIC as the Chief Guest. The Chief Guest complimented COMSTECH, the OIC Ministerial Standing Committee on Scientific and Technological Cooperation and

ICYF, the Islamic Cooperation Youth Forum, for organizing an essay competition on Artificial Intelligence (AI) for the youth of OIC countries. Speaking at the online Prize Distribution ceremony of the event he emphasized the need for member countries to invest in forefront technologies, and in particular for the youth to become familiar with AI as it would profoundly affect the employment landscape of the near future.

he Coordinator General of COMSTECH, Prof. Dr. Muhammad Iqbal Choudhary highlighted COMSTECH efforts to promote scientific cooperation between member states for coordinating efforts in fighting COVID-19 as well as keeping abreast of frontiers in science and technology. He identified several recent initiatives of COMSTECH for enabling capacity building of member states in the field of AI.

The President of ICYF Taha Ayhan highlighted ICYF efforts to motivate OIC youth towards emerging technologies and the opportunities that they present for future careers.

Dr. S. Khurshid Hasanain, Adviser COMSTECH, described the event as open to participants from all OIC countries and consisting of two categories viz. students (18-25 years) and young professionals (25-35 years). The essays could be in any of the three official OIC languages (English, Arabic or French) and were required to be original and unpublished.

An international Jury of four experts from different OIC countries assessed the entries on the basis of the structure and organization, technical mastery of the selected topic, novelty 2 of the idea being proposed, and finally, realistic potential of the proposed theme for application. Possible themes for the essays were identified as AI in Health/Education, AI for Technology Frontiers, AI in E–Governance, Ethical & Regulatory Issues in Applications of AI and AI for Social Development.

A total of 110 participants from 22 different OIC countries applied for the competition. On the basis of their 300-500 word abstracts, 43 participants were shortlisted for the two categories. Each essay was evaluated independently by several Jury members.
The following winners were announced by the ASG OIC in the two categories:
Professional/Advanced Student Category:
1st Prize was awarded to Mr. Beltus Nkwawir Wiysobunri of Cameroon for his essay titled A Deep Learning Automatic Tactile Pavement Detection System for the Visually-Impaired
2nd Prize was awarded to Mr. Ousman Touray of Gambia for his essay titled Monitoring Health: Monitoring Diabetes and Hypertension Using AI
3rd Prize was awarded to Mr. Selahattin Bingol of Turkey for his essay titled Do Judges and Prosecutors Need to Be Worried? (AI Control on Laws).

1st Prize was awarded to Ms. Sara Marhoon Al-Ghafri from the College of Engineering, National University of Science and Technology, Oman for her essay titled, SANAD: A learning tool for the visually impaired.
2nd Prize was awarded to Ms. Joanna Gomez of the School of Arts and Sciences, Division of Humanities and Social Sciences, University of the Gambia (UTG), Gambia for her essay titled, Certification and Auditing as Tools for Effective Data Regulation and Oversight in Artificial Intelligence.

3rd Prize was awarded to Ms. Samawia Rizwan of the National University of Science and Technology (NUST) (RCMS), Islamabad, Pakistan for her essay titled, Integrated machine learning and bioinformatics approaches for the Development of potential therapeutics against pandemic diseases. 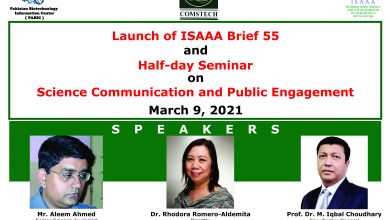 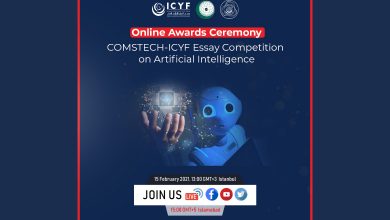