COMSTECH Awards are conferred biennially in ‘Basic Sciences’ and in ‘Excellence in Science and Technology’ to recognize the outstanding research work carried out by scientists who are citizens of, and working in, OIC member states. Each award carries a certificate, shield of honor and a cash prize.

Following scientists have been selected by the jury of international experts for 2019 awards:

I- COMSTECH Award in Mathematics 2019 (Shared)

Khalil Ezzinbi received his PhD in mathematics from Cadi Ayyad University in 1997. He became a full professor in 2001. His research interests are evolution equations, operator theory, partial functional differential equations, dynamical systems and integrodifferential equations. He serves as an editor-in-chief and/or an associate editor for several mathematical journals. He has been visiting professor at numerous universities at African, Asian, European and North American Universities.  He is a member of the African Academy of Sciences since 2009. Professor has had several PhD students in many countries including Morocco, Senegal, Tchad, Nigeria, Cameroun, Burkina Faso, Tunisia and Algeria. He was member of several doctoral dissertation committees in Africa. His works have inspired many researchers and influenced many publications worldwide. Over 190 papers and 3091 citations of Professor Ezzinbi are indexed in MathSciNet and his recent h-index is 31 with Google Scholar. Professor Ezzinbi supervised 27 PhD students from Africa. These are outstanding achievements for a mathematician working and living in Africa.

Sajad Jafari was born in Kermanshah, Iran, in 1983. He received his BSc, MSc, and PhD degrees in biomedical engineering in 2005, 2008, 2013 from biomedical engineering department, Amirkabir University of Technology (Tehran Polytechnic), Tehran, Iran. He is currently an assistant professor in there (since 2013). His research interests include nonlinear and chaotic systems and signals, and mathematical biology. Also he is interested in complex networks and collective behaviours in them, such as synchronization, Chimera states, and spiral waves. He serves as editor in International Journal of Bifurcation and Chaos, International Journal of Electronics and Communications, and Radioengineering. He has been one of the highly cited researchers in 2019 and 2020 according to Clarivate Analytics.

Amer Iqbal has a doctorate in theoretical physics from Massachusetts Institute of Technology. He was the Academic Director of the Abdus Salam School of Mathematical Sciences responsible for all research and academic aspects of the school. He was a postdoctoral fellow at Harvard University and a faculty member in the mathematics department at the University of Washington (Seattle). He was given the Abdus Salam prize for physics in 2009 for his work on supersymmetric gauge theories and topological strings.
Dr. Iqbal is primarily known for his work on mirror symmetry, topological strings, and supersymmetric gauge theories in various dimensions. In recent years Dr. Iqbal has worked on little string theories engineered using M5-branes in M-theory and double elliptically fibered Calabi-Yau threefolds in F-theory.

EXCELLENCE IN SCIENCE AND TECHNOLOGY

Introduced in 2009 and modified in 2017, these seven (7) awards have so far been given to nineteen (19) scientists from Arab Republic of Egypt, Islamic Republic of Iran, Malaysia, Kingdom of Morocco, Islamic Republic of Pakistan, Kingdom of Saudi Arabia, Republic of Turkey, and Republic of Uzbekistan. The Young Researcher Award, Best Scientific Book and Patent Award carries cash prize of US$3000 each. The Best Research Paper Award given in each of the four basic sciences (Biology, Chemistry, Mathematics and Physics) carries cash prize of US$2000 each.
The details of 2019 winners under this category are given below:

Ali Akhaddar is a Professor of Neurosurgery at Medical School of Rabat -from Mohammed V University- and the Head of the department of Neurosurgery at Avicenne Military Hospital of Marrakech. He is an International Fellow of the American Association of Neurological Surgeons, member of the American Congress of Neurological Surgeons, the French speaking society of Neurosurgery, the American Association for the Advancement of Science, and the Russian Academy of Natural History. His fields of interests include central nervous system infections, spinal surgery, stereotactic surgery, neurosurgical complications, and history of medicine. He has received many awards during his career including from the World Federation of Neurosurgical Societies (Nagoya-2007, Boston-2009, and Seoul-2013), French Society of Hospital History (Paris-2014), and Mohammed V University (2011/2017). He is the Associate Editor-in-Chief of the journal Surgical Neurology International/Infection. He has published 9 books (one translated into Chinese), 15 book chapters, 175 papers indexed in PubMed, and he has 210 publications in Scopus.

Salman Alrokayan is an eminent scientist and academician from Saudi Arabia. He was graduated from Nottingham University, UK. Currently, he is serving as a Senior Professor of Biochemistry at King Saud University, Riyadh. He was the founder Dean of King Abdullah Institute for Nanotechnology, the first nanotechnology research establishment in the Arab world. Prof. Alrokayan promoted the policy of scientific innovation and knowledge sharing by establishing research collaborations with prestigious institutions from different countries including UK, Germany, and Malaysia. Several of his scientific discoveries have been patented by US and European patent offices. Besides being the Principal Investigator of many research projects, he also headed a collaborative project with SPIMACO (the largest pharmaceutical company in Saudi Arabia) to produce therapeutic proteins. Academically, he served as a Visiting Professor at Leeds University and played an active role in establishing several masters and doctoral programs at King Saud University.

Sepideh Khoee is currently a Professor of the Polymer Department at the College of Science, University of Tehran. She earned her PhD in Polymer chemistry from the Isfahan University of Technology, Iran, in 2003. Dr. Khoee research is focused on the design, synthesis and characterization of novel polymeric structures via various polymerization techniques. She is co-author of more than 130 original research papers, national and international patents, and several book chapters and supervised 22 Ph.D. and 63 M.Sc. theses. She is the recipient of several awards, including the selected executive director of applied research in the 22nd Research Festival of UT (2013) and the outstanding researcher in the 7th Iran Nano Festival by Iran Nanotechnology Initiative Council (INIC), 2013.

Hammad Naveed is an Associate Professor of Computer Science and the Director of the Computational Biology Research Lab at the National University of Computer & Emerging Sciences, Islamabad Pakistan. He received his PhD in Bioinformatics from University of Illinois at Chicago (2012). He was a Research Assistant Professor at the Toyota Technological Institute at Chicago, University of Chicago from 2014-2017. He received his postdoctoral trainings at the CAS-MPG Partner Institute for Computational Biology, Shanghai China (2012-2013) and at the King Abdullah University of Science and Technology, Saudi Arabia (2013-2014). He has published 35+ research papers in leading journals and conferences. He is particularly interested in computational identification of novel drug targets, drug re-purposing, computational characterization of membrane proteins, pharmacovigilance, protein function prediction and disease identification using various imaging techniques. He is currently exploring avenues to convert research into products for the betterment of the society.

Farid Harraz is currently a Professor at the Advanced Materials and Nano-Research Centre, Najran University, Saudi Arabia and a Professor (on leave) from the Advanced Materials Department, Central Metallurgical R&D Institute, Cairo, Egypt. He got his Ph.D. in Physical Chemistry from Kyoto University, Japan in 2003. Prof. Harraz was a JSPS fellow at Kyoto University during 2003-2005 and visiting scholar to Department of Materials Science & Engineering, Univ. of Delaware (2011) and Univ. of Florida, USA (2009). He was awarded the Encouragement State Prize in Advanced Technology Science (2009) and Environmental Science Award (2012) and the award of Prof. Osama El-Khouly in Environmental Science (2016) from the Academy of Scientific Research and Technology, Egypt. He also received the first award of Federation of Arab Scientific Research Councils for Outstanding Scientific Research in Nanotechnology (2014) and the Publication Award from Misr El-Kheir Foundation, Egypt on 2010 and 2012. Prof. Harraz is a master in electrochemistry, physical chemistry, materials chemistry and Nanotechnology. He has extensive experience in managing R&D projects funded from international and national funding agencies. Prof. Harraz has distinguished scholarly work and publications record in prestigious, peer-reviewed International Journals. He is the author of around 230 papers (104 peer review academic articles, 77 abstracts and proceedings in international conferences and 50 national conferences, 3 book chapters and one US Patent with an h-index 33, total citations 2672 according to Scopus.

Seyed Hossein Hendi is an Iranian physicist, specializing in general relativity and electrodynamics. His work focuses on the models of gravity, black holes, wormholes, solitons, neutron stars, and related stuff. Dr. Hendi obtained his B.Sc. degree in Physics from Isfahan University of Technology, Iran, 2001. He obtained his M.Sc. and Ph.D. degrees in Theoretical Physics, Gravitation, and Cosmology (2004, 2007). He became an Assistant Professor at Yasouj University (2007-2012) and subsequently a faculty member of Shiraz University as an Associate Professor to date. Dr. Hendi is author and/or co-author of more than 150 scientific articles published in international peer-reviewed specialist journals, which have received over 4500 citations. Besides, awarded grants from Iran’s Scientific Elites Foundation (ISEF) for three consecutive years of 2018, 2019, and 2020, he also have an ICTP grant for participating in an activity of the Abdus Salam ICTP, Trieste, Italy, 2019. As a researcher, he spent two short visits at the University of Oldenburg in Germany, 2018, and Charles University in the Czech Republic, 2019. .

A Capacity Building Initiative of COMSTECH for OIC member States 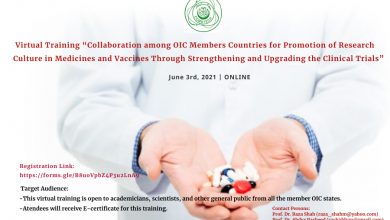